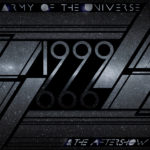 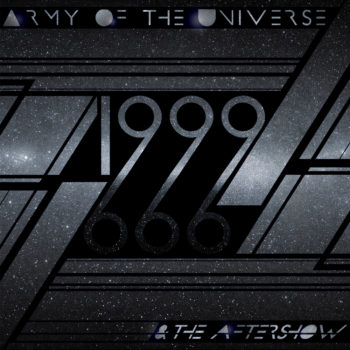 For Fans Of KMFDM, Ministry, and “Mechanical Animals” era Marilyn Manson, the Italian trio Army Of The Universe delivers a fancy cocktail of industrial rock riffs, modern electronica, analog synths sounds and overwhelming dance beats. Pure entertainment.
Formed in 2008 by trance and techno producer Albert Vorne (aka Trebla), vocalist Lord K, lead singer of Kult of the Skull God, and guitarist Davide Tavecchia, the band toured with KMFDM in North America in August 2011 and supported Skinny Puppy on the February leg of their 2014 Live Shapes for Arms tour.
Follow up their debut, “Mother Ignorance” (mixed and produced by Chris Vrenna) and a consistent second album, “The Hipster Sacrifice”, their third strike seems to be the deadliest. END_OF_DOCUMENT_TOKEN_TO_BE_REPLACED

This is a monstrous trip back to my childhood’s worst nightmares. A journey on the wicked sound of post-dubstep EDM which bring back to life Pumpkinhead, Freddy Krueger and all the vicious mutant monsters and hell resident devils. And FIGURE (aka Josh Gard) knows what make us click, he crafted the most intense mixture of banging rhythms with massive bass drops and delivered once again a bloody sonic butchery!
Drawing inspiration from such classic horror as “It’s Alive” (1974), “Pumpkinhead” (1988), and Evil Dead (1981), and featuring an array of diverse artists including Kool Keith, Dirty Deeds, and Bitter Stephens, the newest installment of the “Monsters” series is a masterpiece fusion of horror iconography and massive bass.
In the hyper-evolutionary world of EDM, DJ/producer and drumstep champion Figure, is a force to reckon with. The Indiana native crafts a soundscape of dark and disturbing sonic stimuli, with a thread of melodic production that keeps listeners enthralled.
EDM/Heavy Bass producer and horror enthusiast FIGURE has released the fifth installment of his massively successful “Monsters” series today! With 13 massive tracks and featuring such diverse talent as D-Styles, Kool Keith, and Bitter Stephens, “Monsters Vol. 5” delivers all of the horror and bass that fans have come to expect, making the year long wait well worth the patience! END_OF_DOCUMENT_TOKEN_TO_BE_REPLACED

Cleopatra Records introduce Blackburner and their highly anticipated full-length album. Labeled “a bold new force in electronic music” and inspired by the new trends set on the electronic dance scene generated by the likes of fellow DJ Skrillex, Blackburner is the brain-child of multi-talented producer/musician Skyla Talon.
A Michigan-born Los Angeles transplant, Talon cut his teeth in the music capital of the world with the modern metal band Killingbird, which he founded, and in 2005 joined Scum Of The Earth, featuring former ROB ZOMBIE axeman Riggs.
The project immediately met with enormous success as compilations featuring BLACKBURNER climbed the iTunes charts and BLACKBURNER tracks racked up over 80,000 downloads. Hitting the top of Beatport Dubstep Charts at number 1 and presently continuing to stay on iTUNE Dance charts for over a year with their remix of Pumped Up Kicks. Bolstered by the overwhelming on-line buzz, preparations were made for a full-length album – and now the time has come for BLACKBURNER to make its worldwide launch. BLACKBURNER combines the heavily twisted and seriously aggressive Bass beats of Dubstep and Glitch with the melodic hooks of Electronica to create a daring yet widely appealing new hybrid sound. END_OF_DOCUMENT_TOKEN_TO_BE_REPLACED

While the post-dubstep mainstream EDM scene is populated exclusively by plastic dolls, posers and annoyingly boring “copies of imitations”, it’s quite refreshing to listen to something powerful, modern, but still attached to the classic values and to the classic sense of the values such as “We Love You”, the 7th and probably the deadliest album by Andy LaPlegua, the one man army and the master mind behind the Combichrist machinery. Although the Ministry parallels are still there, Combichrist it’s definitively one of the best and most intense EDM bands from the scene and their Aggrotech aggression it’s always meaningful and genuine each time.
Without reinventing the EDM, without doing anything revolutionary, they managed to sound fresh and refreshing, modern without becoming predictable and boring as most of the other bands and artists from the EDM scene are sounding. There is life and music after drops and wobbling s*its after all! END_OF_DOCUMENT_TOKEN_TO_BE_REPLACED

This is how probably The Jimi Hendrix Experience would sound if they would be still around.
I was skeptical about this as I am skeptical about any type of so-called supergroups. And this is definitively a supergroup while we have here three rock icons such as Doug Pinnick of King’s X on vocals and bass; George Lynch of Dokken and Lynch Mob on guitars and Ray Luzier of Korn behind the drum kit. On the other hand I always loved the powerful rock trios such as Cream, The Jimi Hendrix Experience, Rush, Motorhead (Ace of Spades era!), Primus, The Police, Nirvana, Muse, etc. And then again, I had my reserves regarding King’s X because their Christian affiliation/association. Don’t get me wrong, don’t care about the faith of anybody, it’s their own PRIVATE matter, but I don’t like to mix music and faith issues and don’t like to be guided, less, listening preaches on guitar riffs. But then Pinnick’s announcement in 1998 of his homosexuality. Another thing I disapprove: your sexual orientation should be another PRIVATE matter, don’t make a thing out it! (“Metal God” Rob Halford of Judas Priest did the same controversy announcement back in 1998…) As a result, the self-proclaimed religion of love (and tolerance) re-trait the support of the band and removed King’s X records from their distribution through Christian book stores. So, Pinnick has since openly discussed his agnosticism and his belief that Jesus Christ was not truly the Son of God, however, band mates Tabor and Gaskill, have a background in Christian rock and self-identify as Christians.
Too many non music related issues cloud the music… This is a quite dis-balanced and twisted world, isn’t it? And sometimes all that non music related buzz cover and kill the music. Fortunately, not this time!
While King’s X was more off then on in the last decade, Doug Pinnick had numerous guest appearances and worked on several side projects lately (as Pinnick Gales Pridgen). END_OF_DOCUMENT_TOKEN_TO_BE_REPLACED

I’m not one of the unconditional fans of the modern guitar virtuosos. My guitar heroes were (and still are) Hendrix, Zappa, Page, Iommi, etc. More recently Buckethead and several more jazz oriented guitar players as Aram Bajakian or Marc Ribot. But I admit, I was quite into “Flying in a Blue Dream”, it was an album I loved and I still do. Although I had listen almost each and every album he played on, including the G3 project and the hard rocking Chickenfoot, I always find at least a couple of great songs, nice passages, interesting parts on his works.
Satriani came into focus when one of his first students, Steve Vai started mentioning his name quite often. His students included Kirk Hammett of Metallica, David Bryson of Counting Crows, Kevin Cadogan from Third Eye Blind, Larry LaLonde of Primus and Possessed, Alex Skolnick of Testament, Rick Hunolt (ex-Exodus), Phil Kettner of Lääz Rockit, Geoff Tyson of T-Ride, Charlie Hunter and David Turin. During the G3 tours, which he founded in 1996, he invited and collaborated with several famous guitarists such as Vai, LaLonde, Timmons, Steve Lukather, John Petrucci, Eric Johnson, Yngwie Malmsteen, Brian May, Patrick Rondat, Paul Gilbert, Adrian Legg, Steve Morse and Robert Fripp.
“Unstoppable Momentum” is the fourteenth studio solo album by Satriani and it’s scheduled to be released on May 7. He will tour the album with Marco Minnemann on drums and Bryan Beller on bass. The album was recorded by Joe Satriani – guitar, production, Mike Keneally – keyboard, Vinnie Colaiuta – drums, Chris Chaney – bass and engineered and co-produced by Mike Fraser. END_OF_DOCUMENT_TOKEN_TO_BE_REPLACED

Steve Coleman began playing music just days before his 14th birthday and nowadays, 43 years later, Steve Coleman’s music it’s still fresh and he’s still hungry to explore magical-mystery places, unrevealed paths and dimensions, he’s still searching for the unheard and unconventional.
And many of his incredible musical adventures are still available for free download on his official site, at the download section (including some of those albums I had falling in love with more then two decades ago as “Rhythm People”, “Black Science”, “Drop Kick”,”The Tao of Mad Phat”or “Anatomy Of A Groove”). Really cool, but don’t you ever forget, artists need our full support to be able to deliver unconditional art in a world of conditional and conditioning. END_OF_DOCUMENT_TOKEN_TO_BE_REPLACED

A band formed 45 years ago are getting to their 19th studio album and have sold over 100 million albums worldwide, including 7.5 million certified units in the US. If this isn’t a true hard rock legend, don’t know what it is.
Drummer Ian Paice was there from the beginnings in ’68, bass player Roger Glover and singer Ian Gillan joined the band for the first time in ’69, guitarist Steve Morse replaced Ritchie Blackmore in ’94 after the band was refused by the touring replacement of Blackmore, the legendary Joe Satriani. Don Airey joined in 2002, when founding member, keyboard player Jon Lord announced his amicable retirement from the band.
I heard the single “All The Time In The World” for the first time and as result, I almost skipped the album. It’s a quite tasteless, mediocre, forgettable single, pretty bad choice I think. Fortunately I was curious enough and I had the time and the patience to listen into the whole album and I was pleasantly surprised. END_OF_DOCUMENT_TOKEN_TO_BE_REPLACED

Autism is an instrumental post-rock project from Lithuania. After releasing a digital debut EP “Falling Motion”, which got quite positive reactions from post rock fans all over the globe, Autism has released a brand new album “The Crawling Chaos”. The new release contains 6 tracks, while the sound it’s much heavier, metal rooted and the atmosphere it’s darker, but nicely layered and filled with memorable melodies.
That’s, what the man behind AUTISM project had to say about the new album : “When I started writing new material for this album, I decided that this time, I want to hear some vocals. Making instrumental music was not enough, so after some interesting experiments I decided to END_OF_DOCUMENT_TOKEN_TO_BE_REPLACED

After having Iggy ready to detonate himself with a dynamite-belt, now we’ve got a babe in the same pose and situation. It’s something really sick going on, or this is just another usual Monday morning?
Although “Babes in Consumerland” coming 21 years after their debut left-field dancefloor hit “Corporate Slave”, it was my first direct collision with Snog and I’m sold. The 10 tracks of “Babes in Consumerland” are a gloomy mixture of 80’s flavored electronics and beats, subversive pop hooks, post-industrial resonances with humor to keep us sane and contains acid criticism of our regression and comfortable consumerism. Great lyrics, simple, but very effective music and arrangements, a little bit of sex, a little bit of politics, perfect mixture and outcome.
The album have several key-tracks. My favorites are “The New Cocksucker Blues” (“Have you sucked some cock today?” respectively “I piss on you when you’re on fire”) which is a kinky reference to the music industry, but might be also related to The Rolling Stone’s 1970’s “Cocksucker Blues”, the last single The Stones had to produce for Decca Records which obviously the has been never released; “Everything Is Under Control” – which is a strong parody of pop music and culture and proves only that actually nothing is under control; “21st Century Lullaby” with a charming Pink Floyd versus David Bowie taste or the industrial fueled “The Corporate Homoerotic Cyclists”. END_OF_DOCUMENT_TOKEN_TO_BE_REPLACED