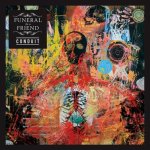 The sixth studio album by Welsh post-hardcore band Funeral for a Friend was released through Distiller Records on 28 January 2013 for Europe, and will be released on 5 February 2013 through The End Records In the United States.
Funeral For a Friend are considered one of the prominent influence on the British post-hardcore scene and their debut album, “Casually Dressed & Deep in Conversation” it’s considered by most of the critics and fans as a release which set a high standard for the band to rival in future releases.
With diverse roots back and gathered influences from heavy metal to melodic and post-hardcore, adding emo and screamo weaponry, Funeral For a Friend have shown a progression and maturity with each record, although, some fans disliked the changes while on the way they lost some brutality and became more melodic and the howling, screaming vocals were almost completeyly replaced by clean vocals.

With their 2008’s 4th album, “Memory and Humanity”, they returned to a more post-hardcore sound, but keeping the melodic arsenal and alternative rock influence incorporated. The previous album, 2011’s “Welcome Home Armageddon” was considered “ferocious and beautiful” and satisfying for both, old and new fans. FFAF managed to combine the hardcore intensity and rawness with melodic, pop-punk elements.
“Conduit” bring back more aggression than fancying their late, more melodic side. Old fans will be satisfied. Pat Lundy (ex-Rise to Remain), their new drummer integrated perfectly. The album it’s fueled by a punk spirit, short and intense songs, with strong metal riffs and some technical, fast and brutal passages, but including mainly very melodic vocals, and some memorable harmonies.