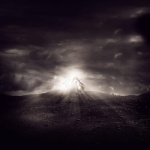 The Swiss trio are back and it’s time for the new set of dark and furious butchery! Although guitarist Antoine Tinguely (ex-Berserk For Tea Time) replaced former guitarist Samuel Vaney, Vaney is now supporting the band as composer/mixer.
While the drums were recorded in the REC Studio of Serge Morattel in Geneva, they recorded the guitars and vocals in their own rehearsal room, the new album is the result of hard work, giving the band big freedom in creation and the possibility to fully assume the production process. The sound it’s pretty raw, unpolished and have a pithy live vibe, if you pump up the volume high enough, almost feels like you are there in the rehearsal room. So, “Phoebus” it’s not about surgically clean sound and high-end production, but about the unleashed strength of metal, about the flesh ripper riffs and pounding like hell drums, about not making compromises, but expressing feelings through music.

Intense and contorted, chaotic hardcore fueled moments and surprisingly melodious build-ups are merged together and gives “Phoebus” an unique and special flavor. Although this is throughout a merciless massacre, between the complex rhythms and noisy, saturated sound, Cortez hide their emotions, manage to write some gloomy, but beautiful melodies, twisted breakdowns and colorful passages.
This mixture of brutality with roots back to crust, sludge and hardcore and doom and black flavored moments keeps the album interesting throughout.
My favorites are “Transhumance”, “L’Autre Estime”, “Temps Mort” and “Sulfure”, while the closing 7 minutes of “Borellia” it’s halfway through a sick experiment into noise and the other half it’s a wild metal gallop.