The Queens are – finally – back. I remembered that Josh Homme once said that “Rock should be heavy enough for the boys and sweet enough for the girls.” It’s exactly what “…Like Clockwork” it’s about. It’s Kyuss, a little bit Screaming Trees and a little bit Monster Magnet with additional Sweethead, Eagles of Death Metal, The Dead Weather and Them Crooked Vultures reflections and reminiscences, it’s Queens of the Stone Age throughout. It’s rock music without any particular label could stick too long on their music. The blues roots are there as the heavy and dark riffs are also there pumping throughout the album. Everybody can find and pick his favorite moments and songs of the album, nobody will be disappointed, every consumer will be satisfied and properly served. It’s simultaneously something good and something annoying about this, but listening the album consequently for several times, I started liking the parts and moments initially I didn’t really appreciate it and eventually ended up liking it throughout.
Still, probably I’m not their biggest fan, but this sixth album it’s a very strong and solid release, have character, have a particular mood and groove throughout, it’s very different from most of the plastic and soulless products that flood the market these days, it rocks your socks off!! 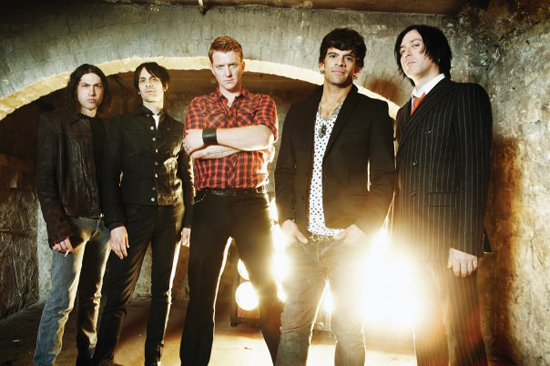 My favorits are “Keep Your Eyes Peeled”, “Smooth Sailing”, “Kalopsia”, “I Appear Missing” and “Fairweather Friends”, but just as I mentioned, I ended up enjoying the whole album after several listening.
Cool, I was not expecting anything and I got an awesome emotional journey and experience.

Buy it or steal it!!

Due for release on June 3, 2013 on Matador Records, leaked to the internet on 16th May.

Initially, back in 2011 when they started working on the new album it was planned that Trent Reznor would produce the album, although plans of recording a follow-up to “Era Vulgaris” had been mentioned since 2008.
In November 2012, Homme announced that drummer Joey Castillo had left the band. Castillo is credited to record “Kalopsia”, “Keep Your Eyes Peeled” and “I Sat by the Ocean”. Jon Theodore (formerly a member of The Mars Volta) recordet the title track “Like Clockwork” while Dave Grohl is credited for all the other drumming on the album.
The album feature some highlight guest performances. Elton John delivered piano and vocals on “Fairweather Friends”, Trent Reznor appear on “Fairweather Friends” and “Kalopsia”, while Alex Turner of Arctic Monkeys play vocals and guitar on “If I Had a Tail”.