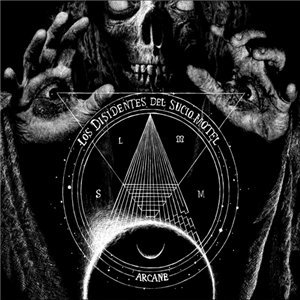 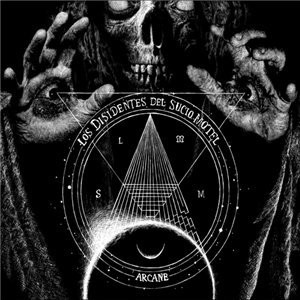 This is head banging, teeth grinding, bone breaking, soul crushing heavy rock. Listening “Arcane” almost can smell the dust from the road filling up the holes of my nose. Merging Black Sabbath and Kyuss flavored heaviness with Motorhead taste like rides, bringing in the same crossroad Alice In Chains and Monster Magnet with Led Zeppelin and Down, this is the most explicit and appropriate expression of road tripping on the back of the bike and afterward partying till the dawn in a strip club with a whiskey in one hand and a beer in the other.
Last time they made a damn good impression with “Soundtrack From The Motion Picture”, the new album it’s even better. 11 flawless tracks, a hell of a ride and a perfect collection of tracks. Memorable riffs, powerful sound and good old distortion throughout. Can’t wish for something else!

Official bio:
Los Disidentes del Sucio Motel is an asphalt eating machine. The band played more than 200 shows during their 7 years of existence both in France and Europe. From clubs to huge fests like Hellfest, Eurockéennes, Decibulles, Lezarts scéniques, Foire aux vins, Desertfest…, they shared the stage with acts like The Smashing Pumpkins, Valient Thorr, Karma to Burn, Crucified Barabara, The Bellrays, Red Fang, Tokyo Sex Destruction, Ufomammut, Deville.
The Maverick brothers are not only rocking stages, they also have a growing discography including one EP, one split 7”, a DVD and their debut album “Soundtrack From The Motion Picture” on respected French label Deadlight Entertainment (home of UNDERCOVER SLUT, PRIMAL AGE, LOADING DATA). This first album has been highly acclaimed by both fans and the media and became the leading name for France’s stoner rock scene.
In 2012, the band released a split 12” with their long-time friends and fellow label bros FLASHFALCON. Mixed at Warmaudio, mastered by legendary producer Glen Robinson (ACDC, IGGY POP, RAMONES) and once again released on Deadlight Entertainment, the band presents 4 highly praised tracks, confirming their solid reputation on the French scene.
In February 2012, they entered Cube Studio to record their 2nd album “Acrane” to be released in the beginning of 2013. Darker and heavier, it’s the perfect mix between ALICE IN CHAINS and BLACK SABBATH but still fuelled by fun!
LOS DISIDENTES DEL SUCIO MOTEL have built their strong reputation on stage as a 6 headed monster: the 5 Maverick brothers (Billy-drums-, Bobby-bass & vocals-, Franky –guitar & vocals-, Johnny –guitar- and Sonny –keyboard & vocals-) under the inquisitive and evil eye of long-time nemesis Sheriff Rudolvski.