Heavy Psychedelia this time merged with Electric Jazz with consistent Miles Davis aroma. References to key recordings or artists/bands of Rock/Metal/Psychedelic or Jazz were always incorporated in their works, but never so directly referential as this time. You need balls, or talent, or both to enter the musical world previously build by Davis, John McLaughlin, Joe Zawinul, Chick Corea, Dave Holland, Jack DeJohnette, Wayne Shorter, Bennie Maupin, and the list is extremely long and filled only with valuable artist. But these Japanese sonic samurais, got balls, got talent, but also the healthy craziness necessary for genuine creation.
“Son Of Bitches A Brew” – with it’s a clear reference to Frank Zappa as well – will not be an easy walk through some sunny sound fields, AMT are delivering extremely dense and vivid incursions into the outer limits of the known musical universe, they not only merging genres, but radically different layers and sounds mostly in the same song their building.
With Kawabata Makoto raging on his guitar, Shimura Koki smashing to pieces his drum kit, Tsuyama Atsushi grinding the bass, Higashi Hiroshi turning his synthesizers inside-out, while Tsuyama Atsushi replacing Wayne Shorter on saxophone, this trip can’t be nothing but dangerously wonderful. 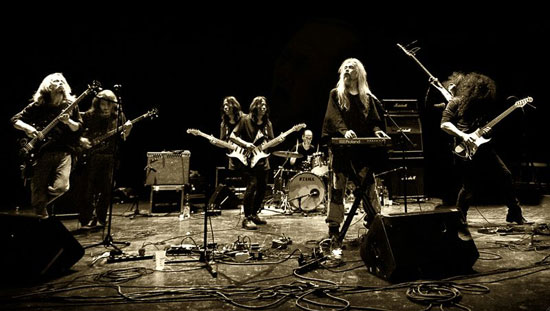 This is a full meltdown of sounds, genres, concepts and not at least, conveniences. The over 17 minutes of the opening “Son Of A Bitches Brew” are a tumultuous Jazz Rock ride. As throughout the whole album, the only solid thing to hang on to are the warm, pumping bass lines of Tsuyama Atsushi and the nicely resonating electric piano of Higashi Hiroshi. Even when they breakdown into some smoother, spacier passages, the music remains intense, heavily layered and overwhelming. The excellent panning, the smart spacial arrangement make possible to listen and follow each instrument, although listening to the whole sometimes might feels like schizophrenia.
“Helen Buddha; Miss Condom X” it’s one of the shorties (only 7 minute) and most spaciest track of the record, pretty dissonant and tenebrous, but less dense, more abstract and Psychedelic flavored.
“Fellatioh’s Dance Also Bitch’s Blow” starts hypnotically softly only to rock you slowly into the spiral of Davis flavored electric Jazz and the fluorescent, blooming Psychedelia. The rhythm gets faster and faster while the music gets denser and further vivid to an unavoidable final blow.
The ultimately free themselves and endlessly swooping synth washes makes this exploration exciting and merge Jazz with Acid fueled Space Rock.
“Water Babies Kill Kill Kill” it’s an almost 20 minute ride with ups and downs, turns and inside out twists. Sometimes it’s extremely intense, sometimes painfully dissonant, once again, only the warm, sometimes contrasting gentle play of Higashi Hiroshi on his electric piano lead the way through in this hurricane of sounds. Sometimes I definitively feel the spiritual presence of Zorn as well.
“Theme From Violence Jack Johnson” becomes tiring. The madness striking high, but somehow it feels less inspired, but fueled by the exclusive joy of the ride itself.
“Tabata Mitsuru” it’s the shortest one, 3 minutes of rhythmic and esoteric build-up, ritualistic and psychedelic simultaneously.
“Sweet Peanut Vs Macedonian Beauty” starts with an extremely catchy bass riff and the album closing in the same intense, colorful spirit as the opening track with a heavy, pounding, Jazz Rock improvisation.

Definitively they have their brilliant moments and this is a mandatory release for the unconditional listeners of unconventional.

Recorded at the Acid Mothers Temple between December 2011 through 2012. Double vinyl limited to 500 copies.