In 2008 Metal Hammer proclaimed them “the trance metal juggernaught the world has been waiting for.” Well, I’m not so sure that the electronic and club addicted persons will actually appreciate the howling voices and the grinding guitar riffs, as well as the metal heads probably will hate all the trance and electronic s*its incorporated in the disturbed Metal by some of the trend rider youngster. But the British media really praised Silent Descent as one of the best new Metal acts, the band won the Kerrang!/MCN Unsigned Live competition, they performed at the Bloodstock Open Air music festival in August 2008, sold out the Camden Underworld along with Alestorm in 2009, headlined Thursday night’s Boardie Takeover at Download festival both in 2009 and 2010.
Following the trends, along the Trance perfumed electronics, the band on their newly released second album inserted some contorted Dubstep noises as well. Surprisingly or not quite, this sounds bloody right! 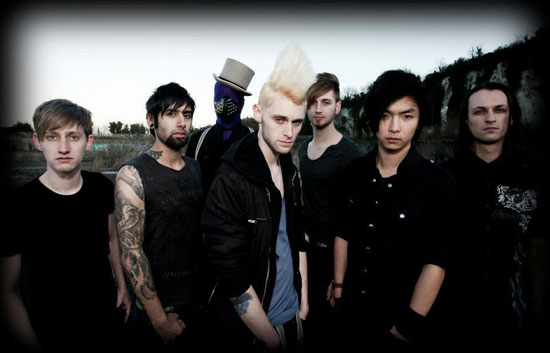 “Mind Games” featuring guest vocals from Sarah Jezebel Deva (Cradle of Filth), and it was mixed by Pontus Hjelm (Dead by April), except tracks ‘1’ & ‘8’ mixed by Hard Trance producer Alf Bamford (Technikal).
Melodic Death Metal, Trance, Metalcore, Dubstep, all fit right in and merged together make sense in their music. Nice electronic pads and layers are blow up by contorted, heavy guitar riffs, brutal screaming and merciless tempos, pounding drums.
I really believe pushing the envelope is the right way and breaking down the borders between genres it’s kind of unavoidable, on the other hand I was quite skeptical regarding this marriage of Trance with Metal, but Silent Descent prove me wrong, “Mind Games” it’s definitively a strong release, an intense, but colorful listening with 11 quality tracks, which is quite a rare quality nowadays.