Few words worth more then a couple of fancy, but meaningless phrases, so, Al Jourgensen – age fiftyfuckingthree years – is back with the twelfth studio album of Ministry and they are simply and straightly louder, faster and angrier then ever. And Mr. Jourgensen is not alone, he’s got serious back up from Mike Scaccia and Casey Orr of Rigor Mortis, Tommy Victor of Prong and Tony Campos of Static X. This time eventually they aren’t pushing the musical boundaries further, they doesn’t break any new ground, but definitively they delivered again the most murderous sonic sledgehammer and you can bang your head to it, get wasted or waste someone, or occupy the streets and markets of your city. Politically correct? The ulcers are gone and Bush is gone, the shit stays the same, the price of the gas goes upper everyday, but let’s stick for now to the music and to this 10 tracks and just bang on this for a while! 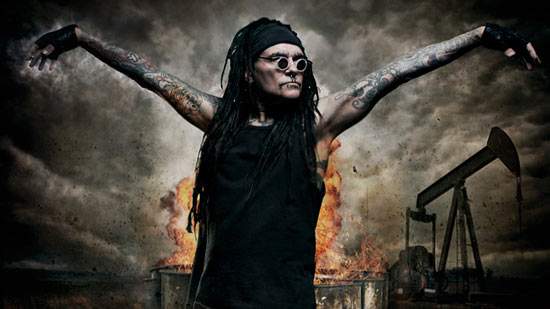 If the mid-80s for most of us meant the battle of Iron Maiden with Judas Priest, till the end of the decade we faced an even more contorted clash of two titans: Ministry and Nine Inch Nails. I love them both, was radically influenced by both and I’m still banging on their music.
Not even the Grunge rage was able to nail to the (under)ground this two Industrial monsters.
Al Jourgensen, the architect of Ministry, morphed Ministry from a lightweight synth-pop band in the early ’80s to a musical juggernaut with many side projects including Revolting Cocks, 1000 Homo DJs, Pailhead, Lard, and succeeded by remaking the mainstream in his own image and forging a new style of music.
In the mid-’80s Ministry released albums showcasing an ever-evolving style. “The Mind Is a Terrible Thing to Taste” and “The Land of Rape and Honey” both went Gold as people searched beyond bland MTV conformity.
“Psalm 69”, featuring “N.W.O.”, “Just One Fix” and “Jesus Built My Hotrod”, went Platinum in 1992 and forever changed music with its heavily aggressive content. But during the late ’90s heyday of “alternative music”, Ministry went on a heavier, darker, more unfriendly and even directly anti-media direction with “Filth Pig” and “Dark Side of the Spoon”.
ComiIn the new millennium Jourgensen returned with “Animositisomina”, followed by “Houses of the Molé” in 2004.
In October 2005, Jourgensen launched his own label, 13th Planet Records and its first release “Rio Grande Blood”, which captured Grammy nominations for “The Great Satan” (2005) and “Lieslieslies” (2006). It was also followed by the remix album “Rio Grande Dub”.
Jourgensen decided to retire and Ministry’s presumed final studio release, “The Last Sucker” was released in 2007. One of my favorite albums so far. A killer one.
The cover album, smartly entitled “Cover Up” was released in 2008 and features Ministry’s Grammy nominated cover of “Under My Thumb”.
As a commemoration of Ministry’s final world tour, the band has released the live CD and Double Disc DVD “Adios Puta Madres”. The DVD contains an entire disc of live performances and a second disc featuring a doumentary on the final Ministry tour.
They also released two remix CDs “The Last Dubber”, and “MiXXXes Of The Mole”, and “Undercover” another cover album.

But fortunately, Ministry are back, alive and kicking. Hard.
And from the very first chord of “Ghouldiggers” till the last breath of “Bloodlust”, Ministry have no mercy. And on this album there are no fills, weaker songs, only tracks which are better than the others. If you loved Ministry before, you gonna die for this one, if you don’t, well, you don’t…. But if you want to show somebody what Industrial Metal sounds like, this is definitively the right stuff to kick off with.
We have a cover included, the murderous “United Forces” by the legendary S.O.D. which sound even further murderous through the Ministry filter.
Definitively and indisputable one of the albums of 2012. Veterans still kicking the asses and I’m only concerned that the nowadays kids can’t even get close to this performances.