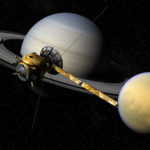 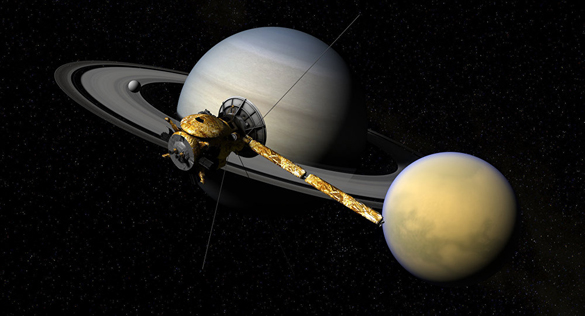 “After two decades in space, NASA’s Cassini spacecraft has ended its remarkable journey of exploration. Having expended almost every bit of the rocket propellant it carried to Saturn, operators deliberately plunged Cassini into the planet to ensure Saturn’s moons remain pristine for future exploration—in particular, the ice-covered, ocean-bearing moon Enceladus, but also Titan, with its intriguing pre-biotic chemistry.
Beginning in 2010, Cassini began a seven-year mission extension in which it completed many moon flybys while observing seasonal changes on Saturn and Titan.”

I was seriously thinking about these things. Saturn is approximately 746 million miles apart (1.2 billion kilometers) when its closest and over a billion miles (1.7 billion km) apart when its further away from Earth. Presumably a rocket, spacecraft, whatever can traveled safely that far away, made it through the Asteroid belt, although the space is not an empty and safety space anyway and somehow we assume that we have that technology to send any kind of information back from that considerable distance. I’m missing something?
I’m a little bit skeptical that we actually have that kind of advanced technology. There are places on Earth, and even in some of the biggest cities of the world where there are no cell phone coverage…no complete satellite coverage here, down on Earth. No satellite, no connection, no data transfer. It’s not that complicated.
1st is an issue of fuel/propulsion. Presumably they made the distance in 7 years. At least 746 million miles!! One year has 8760 hours, 7 years 61320. So, that machinery traveled at about 12.165 miles per hour? Rechargeable batteries? Are you kidding, don’t you? Far as I know, the fastest space rocket currently travels at 4.9 miles per second, which is “only” 294 miles per hour. Do the math. 2nd Space is not empty and it’s not a safe place, not sure how any kind of space machine can make the distance without accidents. How it was controlled and guided? 3rd How any kind of data can be send back? Now seriously, there is no optical cable back and forth, no satellites network, just a freaking billion miles wilderness.
Not at lest: do you believe the space is flat? This is a quite interesting question and bring up a whole set of other issues.

It’s not nice to say, but it seems we’ve been taking for idiots and probably that’s because we are.