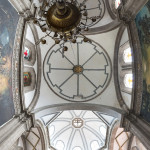 Vertical Churches is a visually stunning series by photographer Richard Silver that presents a set of vertical panorama shots of churches. Each image spotlights the spectacular architecture of these spiritual places of worship using the photographer’s unique technique. We first shared Silver’s incredible project last year when he had originally sought to document churches in New York. He has since expanded his series to include cathedrals across the globe.
The beautifully documented sites in Silver’s photos offer viewers a breathtaking glimpse of the architectural subjects’ towering stature and intricately detailed interiors. Using 6-10 photos to compose each shot, the photographer manages to feature numerous images that are seamlessly woven together to create one spectacular photo that mimics the vision of someone standing directly in the center of the respective church. Each image offers a 180-degree view that captures the magnitude and height of the meticulously designed spaces.