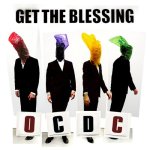 Winners of the BBC Jazz Award 2008 for their debut album “All Is Yes” (Cake/Candid), Get The Blessing is currently one of the UK’s most exciting live bands. Featuring bassist Jim Barr and drummer Clive Deamer from trip-hop legends Portishead, plus the twin horns & electronic devices of saxophonist Jake McMurchie and trumpeter Pete Judge, GTB has forged an unique signature sound that defies genres and merged into one Jazz and Post-Rock instant and infectiously.
Their second album, “Bugs In Amber” was described as “the post-jazz soundtrack to an imaginary low-budget James Bond movie remade by Tarkovsky and starring Buster Keaton” and has received widespread critical and popular acclaim. With influences ranging from Ornette Coleman and Tortoise, to Blondie and Samuel Beckett, GTB has been described as: “A scintillating live experience that will leave you amazed, questioning pre-conceived ideas of music genres, eye-opening and jaw-dropping, there is simply no other band in the world quite like Get The Blessing.”
I’m always skeptical when the media praise an artist, but when I saw the video for their new album “OC DC” it just ripped my head off.

Get the Blessing trumpeter Pete Judge says this new album finds the exuberant Portishead-powered quartet “less afraid to be itself than it used to be”. Still, Jazz Rock might be the most appropriate label to stick to them, but their music it’s kind of more of everything: more electric, more Rock driven, more haunting…. There is a serious dose of Miles Davis, a nice twist of Morricone and a huge amount of raging, unstoppable Rock with roots back to the 60’s and 70’s, but digging wide into the future.
Killer release, by far one of the most fresh things I heard lately and one of the best albums of the year. It’s like a Free Jazz/Improvised album was re-recorded in the studio by a half a Rock, half a Jazz band. Tenacious and murderous!
OC-DC? Are you kidding, don’t you? 😆