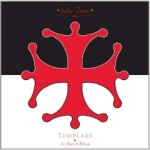 In 2006 John Zorn formed the hardcore voice/bass/drums trio of Mike Patton, Trevor Dunn, and Joey Baron which became known as the Moonchild Trio. The very same year the trio performed and released two albums of Zorn’s compositions: “Moonchild: Songs Without Words” – an album inspired in part by Aleister Crowley, Antonin Artaud and Edgard Varèse and “Astronome”. A third album with the trio, but also featuring Zorn, Ikue Mori, Jamie Saft and chorus, “Six Litanies for Heliogabalus”, was released in 2007. Their fourth release “The Crucible” appeared in 2008, and “Ipsissimus” – one of the best albums of 2010 and my personal favorite albums of all time – was released in 2010.
Now Joey Baron – Drums, Trevor Dunn – Bass, John Medeski – Organ and Mike Patton – Voice are back with the 6th CD in the Moonchild legacy. All songs was written by Zorn and they spend over one year in the making. Disturbing and tumultuous, sometimes extremely intense or silently subtle, the 8 songs of “Templars-In Sacred Blood” will take the listeners into another mystical journey. END_OF_DOCUMENT_TOKEN_TO_BE_REPLACED