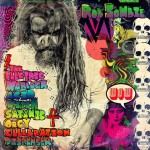 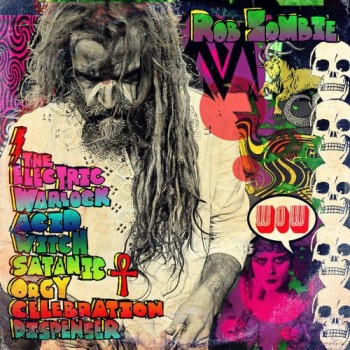 The one, the only, the Jekyll, the Hyde and the Zombie, the U.F.O. pilot, the rock god, the freak out of leash is back! Hide your kids away or he will eat their heart out and steal their souls. Because if Rock’N’Roll has its own little wicked demon, he’s name is Rob Zombie now.
The identical line up as last time (Rob Zombie – vocals, John 5 – guitar, Piggy D. – bass guitar and Ginger Fish – drums, percussion) delivers once again a bad-ass album! This time we’ve got 9 killer tracks (plus 3 shorty instrumentals) that makes you bang. And, ladies and gentlemen, this is what industrial rock is all about. This is not brain surgery, not rocket launching, but entertaining. Take your shoes off, throw away your bloody bones and dance! END_OF_DOCUMENT_TOKEN_TO_BE_REPLACED

Mr. Zombie has sold over 15 million albums worldwide, and had six Top 20 hits on the Billboard Hot Mainstream Rock Tracks chart in the United States. His fifth album, “Venomous Rat Regeneration Vendor” will be released on April 23rd, 2013, four days after the release of Zombie’s film “The Lords of Salem”. The horror film was written, produced and directed by Mr. Zombie, and starring his wife Sheri Moon Zombie.
“Venomous Rat Regeneration Vendor” will be the first Rob Zombie album to feature drummer Ginger Fish (ex-Marilyn Manson, Martyr Plot, and Powerman 5000). Ginger replaced old-time Zombie drummer Joey Jordison who focuse on his own band, the Murderdolls. Matt Montgomery – better known as Piggy D. – guitarist in Wednesday 13 and bassist for Rob Zombie is here, just like guitar genius John 5 (ex- David Lee Roth and Marilyn Manson). With a solid band like this, you only can expect true monstrosities, isn’t it? And well, Mr. Zombie will not disappoint anybody. “Venomous Rat Regeneration Vendor” is filthy, groovy, unforgettable, rock to the bone kind of industrial metal. Somewhere half way between Revolting Cocks, Pigface, White Zombie and Marilyn Manson, but with the totally unmistakable charm and perfume of Mr. Zombie. Actually, this feels like a The Doors album on illegal drugs and perfusion. And regarding the good old days, we’ve got a Grand Funk Railroad cover, now that isn’t so sweet? END_OF_DOCUMENT_TOKEN_TO_BE_REPLACED