Featuring drummer Benny Greb, saxophonist Mark Lockheart, Stephan Maass on percussion & electronics, guitarist Chris Montague, Edward Maclean on bass and Colin Towns (from Ian Gillan Band and Gillan) on keyboards; Blue Touch Paper it’s a Brit-German jazz-rock fusion band while ‘Drawing Breath’ it’s their second album released on the 14th October 2013. Their music it’s a rainbow like colorful mixture of sounds, styles and genres, from Garbarek to Pink Floyd and from ethnic flavored jazz to chilled down and spacy breakdowns, ‘Drawing Breath’ got it all and surprisingly, all those moving parts are coming together nicely and everything make perfect sense. We’ve got 12 songs and over one hour of exciting, groovy music. END_OF_DOCUMENT_TOKEN_TO_BE_REPLACED

Panzanella or panmolle is a Tuscan salad of bread and tomatoes popular in the summer. It includes chunks of soaked stale bread and tomatoes, sometimes also onions and basil, dressed with olive oil and vinegar. It is also popular in other parts of central Italy, but also around the world.
The concept behind Panzanellas is quite simple: just with an act of violence it is possible to conquer freedom, so they start to kill men and animals conquering their own freedom.
Two brand new tracks on the band’s second EP, the same sonic aggression, Panzanellas are grinding on the borderline between free jazz and avant-garde/experimental rock. Heavy beats, contorted and twisted out guitars with tumultuous, crazy saxophone solos throughout. They came in, kill’em all and leave. Pure madness or killer efficiency. No use to compare it with any other band, this is just Panzanellas. And it’s quite alright, we need this kind of out of the box trips and although some will probably label it as a slaughter, this is still much more exciting then most of the prefabricated, plastic and predictable “music” these days. Do yourself a favor, give it 5 minutes from your boring life and get yourself a fair share of aggression and eventually, a broken nose!! END_OF_DOCUMENT_TOKEN_TO_BE_REPLACED

Frustration it’s definitively not that average indie/punk/post-whatever band and although we’re listening to a French band, they sound pretty British-American and bloody intense. Mixing the sound of Iggy and the Stooges, with contorted post-modernist a la Mark E. Smith and The Fall and some Franz Ferdinand/The Enemy type of indie-punk flavors, this Parisian combo find their own path to deliver they heavy, raw and militant post-punk-rock. No compromise, but energy and intensity. Not staying on their knees and becoming a whore of the media and the industry, it’s not only a proof of integrity, but it’s really rare on the music scene lately.
While music became only a secondary sub-product of the music industry, it’s pretty cool to still stumble into some real stuff. And “Uncivilized”, Frustration’s second album was already declared one most important French records released in the past 5 to 10 years. And it makes perfect sense. Just listen to the title track and you will know why this was labeled brutal. END_OF_DOCUMENT_TOKEN_TO_BE_REPLACED

END_OF_DOCUMENT_TOKEN_TO_BE_REPLACED

I can think of and go back to several different stories. First of all, reminds me of the story of Cain and Able, the two sons of Adam and Eve. Cain was the first human born and Abel was the first human to die while Cain committed the first murder by killing his brother. On the other hand, directed by Orson Welles release on 5 September 1941, “Citizen Kane” was a drama which explored the life and legacy of the publishing tycoon Charles Foster Kane, played by Welles. Nothing of this are directly related to the latest Thot EP, but then again, everything in this world is somehow related and inter-connected. “Citizen Pain” is in particularly nobody, but he’s everybody and anybody, one of us and each one of us. Even the pain became meaningless nowadays. Or we became insensitive to the suffering of the others… and get comfortable with our own misery. END_OF_DOCUMENT_TOKEN_TO_BE_REPLACED

Maybe I’m an idiot, but I like “The Marshall Mathers LP 2”. It’s one of the best records of 2013. I can understand the fury and I can feel the pain, taste the irony. This is not a revolutionary record? Eminem did not reinvented the rapping, the rap and the hip-hop? If a bicycle do not need a third wheel – metaphorically speaking – and rap/hip-hop don’t need to be reinvented, I believe Eminem has to be invented. Rap needs Eminem. Simply and plain, just because. Because Eminem is both electric-shock therapy and vitamin. He’s probably not a God as he like to present himself (“Why be a king when you can be a god?” he sings in the song called “Rap God”), but he’s definitively a king. Behind all of his jokes, rhymes and irony I can see a very lonely, very sad, very furious human being. Don’t really give a shit about the over 220 million records he sold worldwide and that make him one of the best-selling music artists of the world, I don’t really consider him one of the greatest artists as the Rolling Stone magazine which ranked him 82nd on its list of The 100 Greatest Artists of All Time, but for sure Eminem got style and know how to say things. And his the eighth studio album, “The Marshall Mathers LP 2” it’s a really solid release.
We’ve got a couple of huge songs (Bad Guy, Rhyme Or Reason, The Monster, Stronger Than I Was, Love Game), and having 15 tracks, it’s really something these days. Only at track 10 – “Brainless” – I had a feeling of saturation and I was tempted to skip that one. But maybe that’s just me again! END_OF_DOCUMENT_TOKEN_TO_BE_REPLACED

Everybody – at least in my shattered corner of the universe – knows that Keith Jarrett is one of the greatest jazz pianist. But what about a series of (almost home) recordings made in his small private studio back in 1986 where Keith Jarrett plays electric guitars, Fender bass, drums, percussion, table, some vocals and only rarely some piano. He also added an advice for the listener in the footnotes of the record: “Play this music LOUD, especially tracks 2 to 20, since many inner details will be lost at lower volumes.” Some critics, “musical experts” (whatever that may mean!) rushed to scream bloody murder and pointed out that this is not jazz. I’m not an expert, but I’m quite curious what they think jazz is? Listening track II I definitively felt like I was i the room where Miles Davis and his very honorable mates recorded “Bitches Brew”. But well, many (idiots) believe that what Miles did after ’68 was not jazz either, so, nothing’s shocking, this planet can bear much more then we can think of.
The other “argument” is that there are no developed melodies and no “real” song structures, only the same type of jamming throughout. It’s probably true, but not heaving rigid song structures and repetitive melodies it’s not something new, building and exploring out of the box was always a way to get further in jazz and avant-garde music, sometimes even in pop (culture). Seriously guys, did you expected that Jarrett will deliver a collection of standards played on guitar, bass and drums? END_OF_DOCUMENT_TOKEN_TO_BE_REPLACED

Secret Chiefs 3 (also known as SC3) is the brain-child of guitarist/composer Trey Spruance, formerly known as member of Mr. Bungle and later he joined Faith No More for their 1995 “King for a Day… Fool for a Lifetime” replacing breathy long-time guitarist Jim Martin. He’s also contributed to bands and artists such as: Faxed Head (as “Neck Head”), Noddingturd Fan (also NT Fan), Weird Little Boy (a one-off studio project), Jonh Zorn, Korn, Everlast, The Cucko For Cacca, Lick it Up, The Bon Larvis Band, ASVA, Scourge, The Three Doctors Band, Plainfield and Mark Shafeild.
Secret Chiefs 3’s studio recordings and tours have featured different line-ups, as the group perform and blend a wide variety of musical styles including traditional Jewish, Persian, Arab and Indian music; electronic music, jazz, rock and extreme metal.
So, if you’re a Mr. Bungle consumer, you will definitively devour “Book Of Souls Folio A”. END_OF_DOCUMENT_TOKEN_TO_BE_REPLACED

This is a quite exciting joint adventure. On one hand we’ve got the futuristic, always inventive music of Celldweller and on the other hand, the award-winning science fiction/fantasy author Joshua Viola best known for his eleven-time award-winning ultra-violent novel, “The Bane of Yoto”.
While the music of Celldweller has always sounded as though ripped from the pages of a sci-ﬁ epic; it’s not really a surprise that there was a narrative behind the sound which slowly came together in Klaytonʼs head. So, he teamed up with Joshua Viola to put that story on paper and the story wouldn’t be complete without a proper score, isn’t it?
Released “Blackstar Act One: Purified”, in the form of both an Original Score as well as a fictional eBook give us the full taste of action and adventure.
The story of “Blackstar” is a thrilling sci-ﬁ adventure that will transport fans to the world only hinted at in prior Celldweller albums, while musically is a journey from ’80s-inspired ‘New Retro’ to unsettling ‘Dark Ambient’ to ‘Electronic/Metal’ fury, all while painting an evocative sonic backdrop to the book.
Download a free sample of the ebook and listen into the EP below. END_OF_DOCUMENT_TOKEN_TO_BE_REPLACED 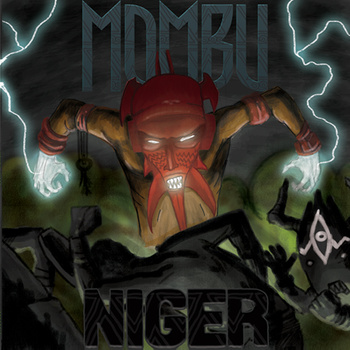 The creative power-duo consists of Luca T. Mai – bariton saxophone player of the band “Zu” – and Antonio Zitarelli – drummer of the famous trio “Neo” – are back with 7, new, mind-blowing tracks.
No label will stick to it, impossible to tag or forced into any fancy box, this is not metal, not jazz, but unconventional, fresh, borderless music. The real thing. Probably not suitable for everybody, but only for true, conscious listeners. This is not tasteless, instantly forgettable background noise, it demands your full attention, but worth every single second of listening.
Afro-flavoured, addictive, tribal rhythms and sometimes hypnotizing, sometimes quite contorted and aggressive saxophone lines, melodies and slaughters. At the crossroads of avant-garde jazz and driving, intense hardcore, Mombu will definitively grind you into the ground. You’re doomed! END_OF_DOCUMENT_TOKEN_TO_BE_REPLACED