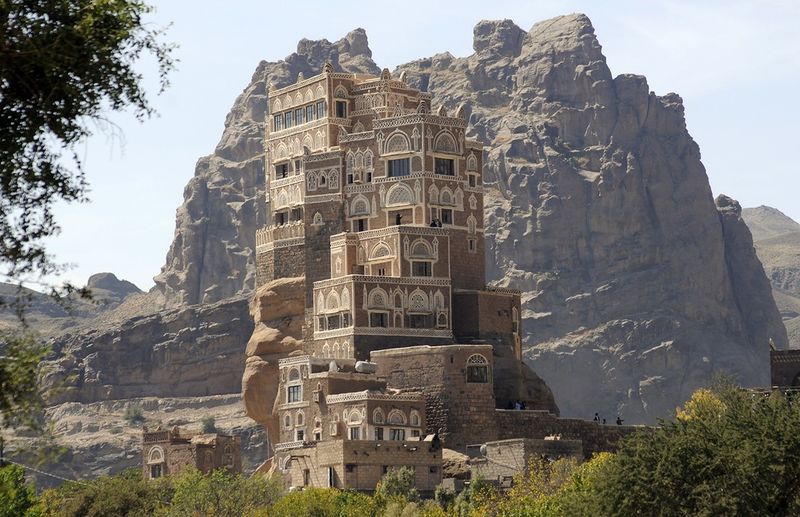 Yemen, officially known as the Republic of Yemen, is an Arab country located in Western Asia, occupying the southwestern to southern end of the Arabian Peninsula. It is bordered by Saudi Arabia to the north, the Red Sea to the west, the Gulf of Aden and Arabian Sea to the south, and Oman to the east.
Yemen is one of the oldest centers of civilization in the Near East. Its capital and largest city is Sana’a. Yemen’s territory includes more than 200 islands, the largest of which is Socotra, about 354 km (220 mi) to the south of mainland Yemen. It is the only state in the Arabian Peninsula to have a purely republican form of government. Yemen was the first country in the Arabian peninsula to grant women the right to vote. Yemeni unification took place on 22 May 1990, when North Yemen was united with South Yemen, forming the Republic of Yemen.
The majority of Yemen’s population is divided into tribal groups, especially in the northern areas of the country where 85% of local residents belong to various tribes. There are also small groups of peoples of Turkish/Ottoman origin in urban areas.
One etymology derives Yemen from yamin, meaning “on the right side”, as the south is on the right when facing the sunrise. Another derives Yemen from yumn, meaning “felicity”, as the region is fertile. The Romans called it Arabia Felix (Happy Arabia) as opposed to Arabia Deserta (Deserted Arabia), which was their term for northern Arabia. Yemen was mentioned in Old South Arabian script as Yamnat particularly after the unification of the four dynasties of ancient Yemen by the Himyarite kings and it literally means “the south-land”.
Yemen has long existed at the crossroads of cultures. It linked some of the oldest centres of civilization in the Near East by virtue of its location in the Arabian peninsula.
Sana’a is one of the oldest continuously inhabited cities in the world. At an altitude of 2,300 metres (7,500 ft), it is also one of the highest capital cities in the world. Sana’a has a population of approximately 1,937,500 (2012), making it Yemen’s largest city.
The old city of Sana’a, a UNESCO World Heritage Site, has a distinctive visual character due its unique architectural characteristics, most notably expressed in its multi-storey buildings decorated with geometric patterns.[1][2] Located here is the Great Mosque of Sana’a, the largest in the city.
According to popular legend, it was founded by Shem, the son of Noah. It was known as “Azal” in ancient times, referring to Uzal, a son of Qahtan, who was a great-grandson of Shem. Its current name likely derived from the South Arabian word for “well-fortified”.
The Arab historian al-Hamdani wrote that Sana’a was walled by the Sabeans under their ruler Sha’r Awtar, who also built the Ghumdan Palace in the city. Because of its location, Sana’a has served as an urban center for the surrounding tribes of the region and as a nucleus of regional trade in southern Arabia. It was positioned at the crossroad of two major ancient trade routes linking Marib in the east to the Red Sea in the west.
Near to Sana’a, Wadi Dhar has most local species of inland birds, except vultures; but particularly interesting is the mule track from Shibam up to Kawkaban. This 45 minute walk rises nearly 923 m, with Tristrams Grackle, larks, wheatears and doves in abundance at the bottom, eagles, ravens and vultures at the top.
Here, in the village of Suq al-Wadi, stands a famous rock palace. Its commanding position and evidence of an ancient well suggest that the site has been used as a lookout post for centuries. It is a classic example of Yemeni architecture and was built in 1786 by Imam Mansour Ali Bin Mahdi Abbas; in the 1930s Imam Yahya Hamid Al Din extended it as a summer residence.
Today, the palace is an open museum of sorts, and a very popular place to visit, not only for tourists but also for local Yemeni families. Different rooms have descriptive labels in English and Arabic. Nearby is the village of Qaryat al- Qabil, with its walled pathways, orchards and vineyards. Here on Fridays from 09.00 – 12.00 Yemenis gather for wedding celebrations. 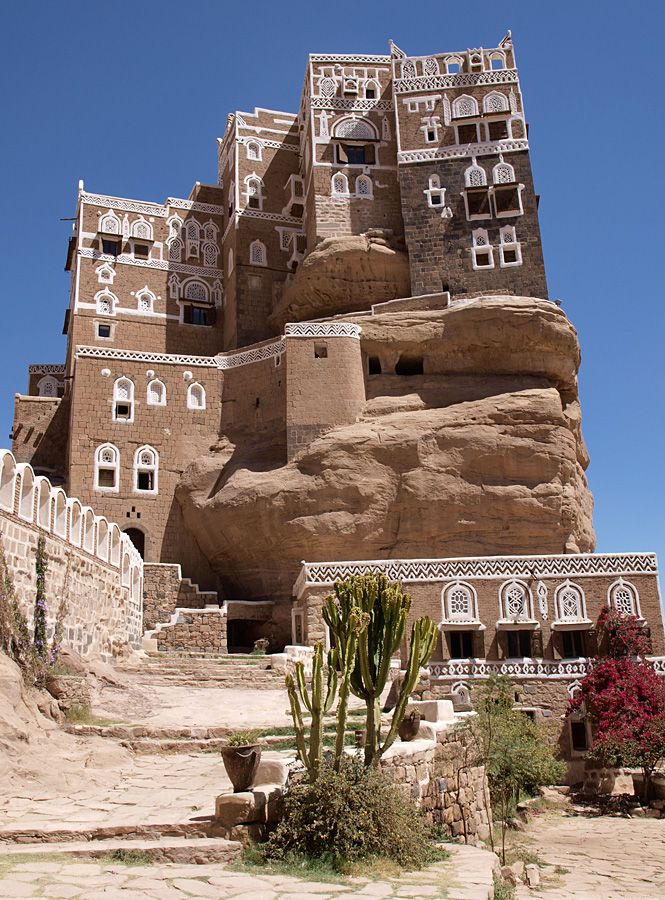 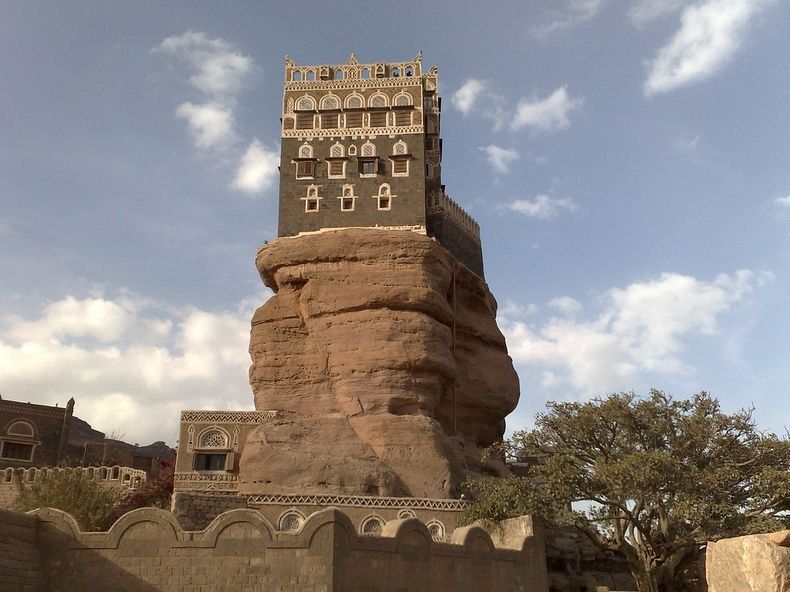 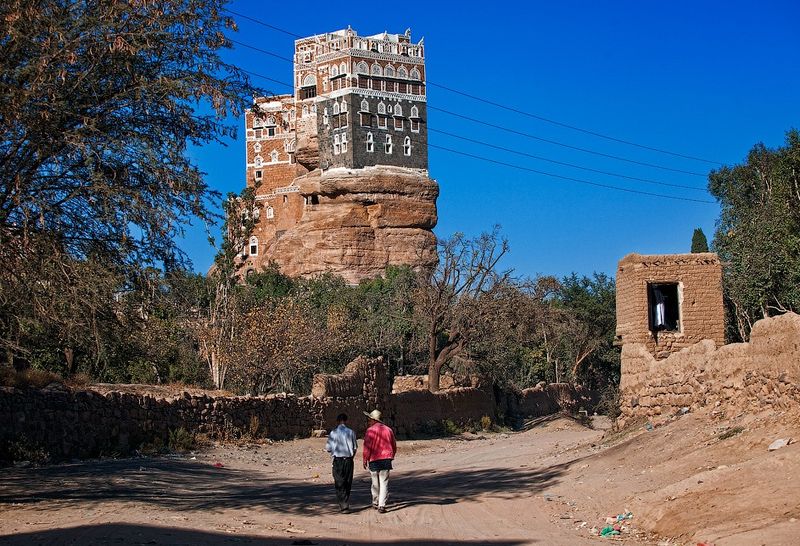 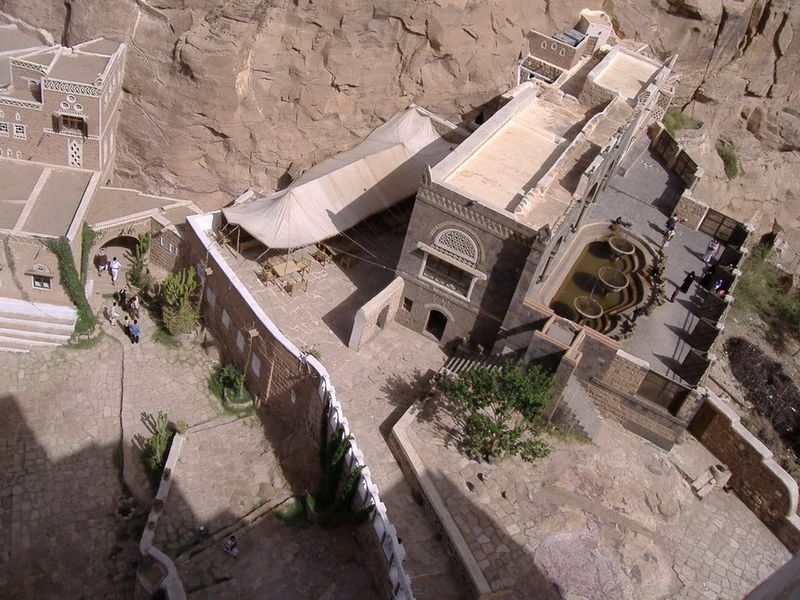